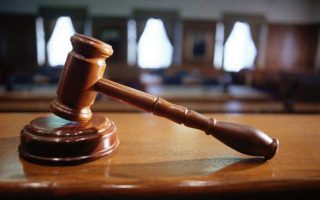 The 20-year-old Irishman charged with the murder on August 30 of a 22-year-old compatriot at a nightclub on the island of Ios, was conditionally released on Thursday on €8,000 bail which he must pay by September 15.

According to the decision by the court of first instance on the island of Naxos, he must also appear every month at the Greek Embassy in Dublin.

One of his lawyers, Alexis Anagnostakis, told Kathimerini that the Piraeus Medical Forensic Report “showed” that the 22-year-old Irishman died of a wound to the right temple, between the right eye and ear.

The injury, he noted, was caused by the victim falling to the ground on the right side of the head. The injury caused a cerebral hemorrhage.

According to his lawyers, “this means, among other things, that the victim fell without trying to put his right hand on the ground, to protect his head.”

The lack of this instinctive movement, they contend, can only happen when a person has a burdened nervous system with a complete imbalance.

“These things happen while one is intoxicated,” they said, noting that the position of their client and that of the witnesses is that he repelled the victim in order to avoid getting hurt.