The trial of Manchester United captain Harry Maguire has begun on the Greek island of Syros.

He is represented by Alexis Anagnostakis, one of Greece's top human rights lawyers. 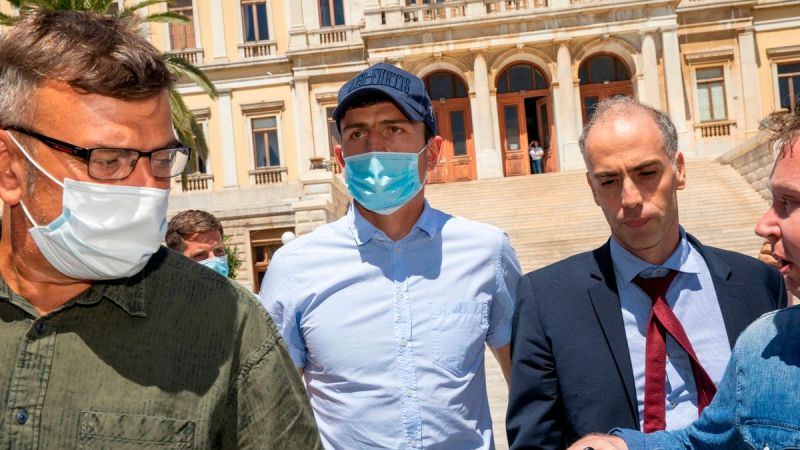 The 27-year-old was released from police custody on Saturday following his arrest on the island of Mykonos on Thursday after an alleged altercation with police officers.

He is not obliged to be in attendance.

Maguire has already pleaded not guilty.

He did not comment after leaving court on Saturday and his lawyer told Sky he was a free man "right now".

The Syros prosecutor's office said on Friday that "three foreigners" had been arrested after an alleged altercation with police officers in Mykonos on Thursday.

The court listing for the case says the other two defendants are Maguire's brother Joe, 28, and family friend Christopher Sharman, 29. Maguire's father Alan was at the court hearing.

Police say a file has been opened which includes accusations of "violence against officials, disobedience, bodily harm, insult and attempted bribery of an official".

Maguire, who was on holiday in Greece, joined United from Leicester for £80m - a world record fee for a defender - in August 2019.

Greek police said in a statement on Friday that officers had tried to break up an altercation between two groups outside a bar and that the three foreigners had then verbally abused and assaulted one of the officers.

The statement claimed that after arriving at Mykonos police station, the three arrested individuals then "strongly resisted, pushing and hitting three police officers" and that "one of the detainees tried to offer money so that the trial against them would not be completed".